Warpfive fans are small precision engineered Stirling engines, which are 100% mechanical and do not have any electric components which may stop working if overheated. Consequently they are extremely reliable and with care will last a lifetime. 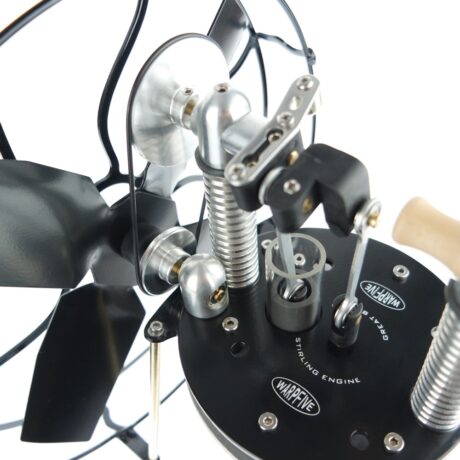 Every engine is precision engineered and handbuilt with durable materials like stainless steel, aluminium, brass and Borosilicate glass.  As a result they operate quietly – typically 28dB.   Additionally advanced materials (such as graphite) and low friction bearings ensure low maintenance.  And a silver themodynamic heat plate ensures that heat flow is optimised.

Warpfive Stirling engine fans have a high power output and low start up speed.  For this reason they move large volumes of air.

All of our Stirling engine fans are individually handbuilt, assembled and tested in Great Britain and come with a  3 year manufacturer’s warranty.

Stirling engines are incredibly reliable.  The engines on the Warpfive test bed have exceeded 22 years of normal use.  During this time period they’ve been oiled only four times with no other maintenance.

HOW A STOVE FAN WORKS?

A stove fan is an innovative device that will help you to get maximum warmth from your stove.   When you use a Warpfive Stirling engine stove fan you will heat your room up to 40% faster and reduce your wood usage by up to 22%. 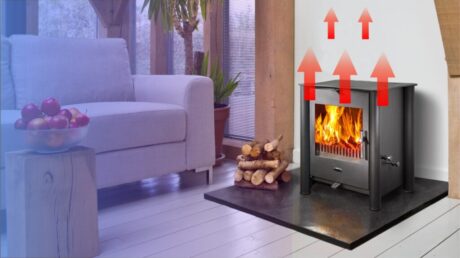 Without a stove fan the heat rises and warms the area directly above and nearby the stove. The area close to the stove is very warm while further away the room is insufficiently heated. 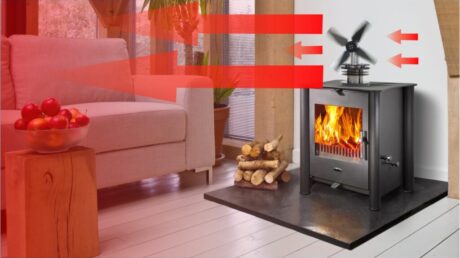 Using heat generated from your wood stove, a stove fan will circulate the warm air throughout your room. Stirling engine stove fans are extremely powerful and able to move large volumes of air. This saves on fuel and makes your home more comfortable.

Whilst designing Stirling engine stove fans, our engineers use FLIR cameras to optimise thermodynamic design. In this footage you will notice the colour differential on the working Stirling engine. The base is bright yellow where it is hottest and then changes to purple / blue where it is coolest. The goal in Stirling engine design is to have the greatest thermal difference between the base and the top of the engine. This results in optimum performance and maximum power output.

A Stirling engine works by moving a sealed volume of air from the hot bottom plate to the cool top plate of the engine. As the air moves from the cool plate to the hot plate it is rapidly heated, it expands and pushes the piston up. As the air is moved from the hot plate to the cool plate it cools rapidly and contracts, this creates a vacuum which pulls the piston down. This same volume of air is rapidly heated and cooled many times per second – this is known as a Stirling cycle engine.  As the piston is connected to a crank shaft it causes the crank to rotate and this produces the mechanical power to rotate the fan blades.  Read more here

How we handbuild our Stirling engines?

Warpfive hand build a range of Stirling engines which are each produced from precision engineered, durable materials.  Advanced materials (such as graphite) and low friction bearings are also used to ensure longevity and low maintenance.  In this video, you can see how these components are put together to build a Warpfive Stirling engine fan.

Warpfive Fans design and manufacture a full range of Stirling engine fans for use across a variety of applications.

Our success is based on the ability to create new and compelling products, for this reason research & development is ongoing.

We are acutely aware that a low-emission future relies heavily upon efficient thermodynamic management systems. To this end our engineers invest a lot of time examining and researching emerging technology in order to improve our products and the performance of low-emission alternative power sources. 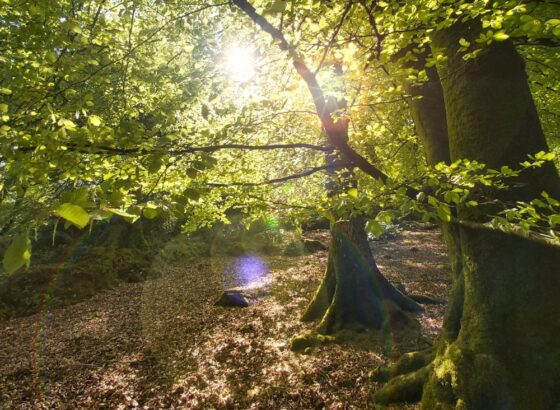 Warpfive Stirling engine prototype generator for use with alternative heat sources such as the sun, gas etc

Warpfive heat exchanger development for use with alternative energy sources

The hot air stirling engine is noted for its high efficiency, quiet operation, and the ease with which it can use almost any heat source. This compatibility with alternative and renewable energy sources has become increasingly significant as the price of conventional fuels rises. The Stirling engine is currently exciting interest as the core component of solar powered electricity generators, as well as in the space industry to power satellites. 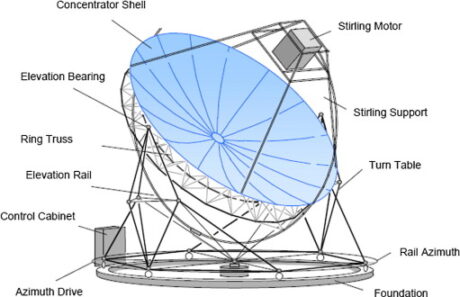 Since the Stirling engine is efficient, produces less pollution than most other kinds of engines, and operates on virtually any kind of fuel, efforts have been made intermittently since the late 1930s to reduce its manufacturing costs. Modern versions of the Stirling engine employ pressurized hydrogen or helium instead of air. Since the 1970s the engine has been adapted for many uses, including cryogenic refrigeration, submarine propulsion, and electrical production. Reverend Robert Stirling of Scotland invented the Stirling engine in 1816.

During that period many of the early high-pressure steam boilers exploded because of poor materials and faulty methods of construction. The resultant casualties and property losses motivated Stirling to invent a power cycle that operated without a high-pressure boiler. In his engine (patented in 1816), air was heated by external combustion through a heat exchanger and then was displaced, compressed, and expanded by two pistons. Stirling also conceived the idea of a regenerator to store thermal energy during part of the cycle and then return this energy to the working fluid.

His company manufactured engines from 1818 to 1922, during which time they were used to pump water on farms and to generate electricity.

Stirling received additional patents in 1827 and 1840 for improvements in the design of his engine. He was made a posthumous inductee to the Scottish Engineering Hall of Fame in 2014.

This website uses cookies to improve your experience while you navigate through the website. Out of these cookies, the cookies that are categorized as necessary are stored on your browser as they are essential for the working of basic functionalities of the website. We also use third-party cookies that help us analyze and understand how you use this website. These cookies will be stored in your browser only with your consent. You also have the option to opt-out of these cookies. But opting out of some of these cookies may have an effect on your browsing experience.
NecessaryAlways Enabled
Necessary cookies are absolutely essential for the website to function properly. This category only includes cookies that ensures basic functionalities and security features of the website. These cookies do not store any personal information.
Non-necessary
Any cookies that may not be particularly necessary for the website to function and is used specifically to collect user personal data via analytics, ads, other embedded contents are termed as non-necessary cookies. It is mandatory to procure user consent prior to running these cookies on your website.
SAVE & ACCEPT
Join our waiting listWe are sorry we currently don't have stock of this item. We are in the process of building the latest range which will be available later this year. Please enter your email address below and we'll let you know as soon as its available.